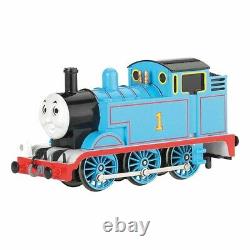 Bachmann Loco 58741BE Thomas the Tank Engine with Moving Eyes OO Scale. He is a cheeky little engine who often gets into scrapes, usually by being over-eager to do things best left to bigger and more sensible engines. But clouds never last long in Thomas world and soon hes bustling about again, playing his part in the yard and on his very own branch line. Thomas works hard and he always strives to be a Really Useful Engine. Highlights Moving eyes Realistic resemblance to the character in the series Compatible with OO/HO gauge track and model railways DCC ready 3+ compliant Suitable for young Thomas & Friends(TM) fans Meet Thomas, Thomas is a blue six-wheeled (0-6-0 Tank) steam engine with the number 1 painted on his side tanks. Thomas first appeared in 1946 in the 2nd book in Reverend Wilbert Awdry's The Railway Series, entitled'Thomas the Tank Engine,' and he is the principal character in the 4 stories contained in the book. Thomas's best friends are Percy and Toby. He works on a branch line with his coaches Annie and Clarabel. All of the locomotives in The Railway Series are based on real historical engines; Thomas has a resemblance to the London, Brighton & South Coast Railway's E2 class of 0-6-0 tank designed by Lawson Billinton in 1913. (c)2017 Jadlam Racing Ltd. The item "Bachmann Loco 58741BE Thomas the Tank Engine with Moving Eyes OO Scale" is in sale since Monday, June 21, 2021. This item is in the category "Collectables\Model Railroads & Trains\Railroads & Trains\Locomotives". The seller is "jadlamracing" and is located in Somerset. This item can be shipped to United Kingdom, United States, Australia.